We all know the basic questions people ask when they first meet someone. I don’t mean things like, “what do you do for work?” Or “Where are you from?” I mean the simple middle school questions like “what’s your favorite color?” Or my favorite, “what’s your favorite type of food?” Different people answer that food question, well, differently. Some people say something generic like “Italian Food” with the same passion and vigor that goes into the actual making. Some people go into something more specific and say “Pizza” like it’s the greatest thing invented since the wheel. (Can blame them. It’s pretty close.)

Others will go into the specifics of what their favorite food is. Maybe it’s a dish that their grandma makes, and although they have tried to make it themselves, even with their grandma’s help, it never comes out the same. Or maybe their favorite food is an amalgamation of different things on one plate, like Thanksgiving dinner—some spaghetti on one side and bbq chicken and mash potatoes on the other. (Who am I to judge!) But the reason I love this question so much because it lets you see what kind of person they are.

I live in a world where there are two kinds of people. Some eat to live, and some live to eat. I am one of the latter. I love food with some exceptions here and there, but have you ever talked to someone who eats whatever will give them the necessary energy to function regardless of taste? It baffles me. I mean, food is something we do at least three times a day, so shouldn’t it be enjoyable? But I digress. But to answer the question mentioned above, my favorite food of all time is the sandwich. Not one specific sandwich in particular, although there is a top 10 for me. But the sandwich as a concept is * chef’s kiss* magnificent.

People usually look at me like I’m some weirdo for saying my favorite food is the sandwich when there are many other things that I could say I love. How could I love two pieces of bread, some greenery, a dairy product, and processed meat slapped together more than I love, IDK, Ramen? Simple, have you ever had a ramen sandwich? (I would love to see your face after reading what is possibly the weirdest sandwich you have ever imagined in your head.) How does that even work? It would get all soggy and gross, but man, does it work.

See, sandwiches’ true beauty is that anything can become a sandwich with enough creativity and just a little bravery. Someone was eating Chicken Parm one day and thought to themselves, “I wonder what this would be like if I stuck it in between two pieces of delicious French bread?” And I thank that brilliant mind all the time. But that’s only half of what makes sandwiches unique. The other half is that sandwiches, by all intents and purposes, are portable. It’s food for on the go if you need it to be, but you also enjoy it just as much at a restaurant.

The other fantastic thing about sandwiches is that they can match your vibe. By this, I mean that if you feel super lazy but need to eat something, make yourself a ham and cheese. Maybe you want something fancier, so you make yourself a chicken pesto sandwich with feta and roasted tomatoes. There is no end to the possibilities, but let me not get sidetracked. I could hype up sandwiches all day. (I’m getting hungry just writing about them.) 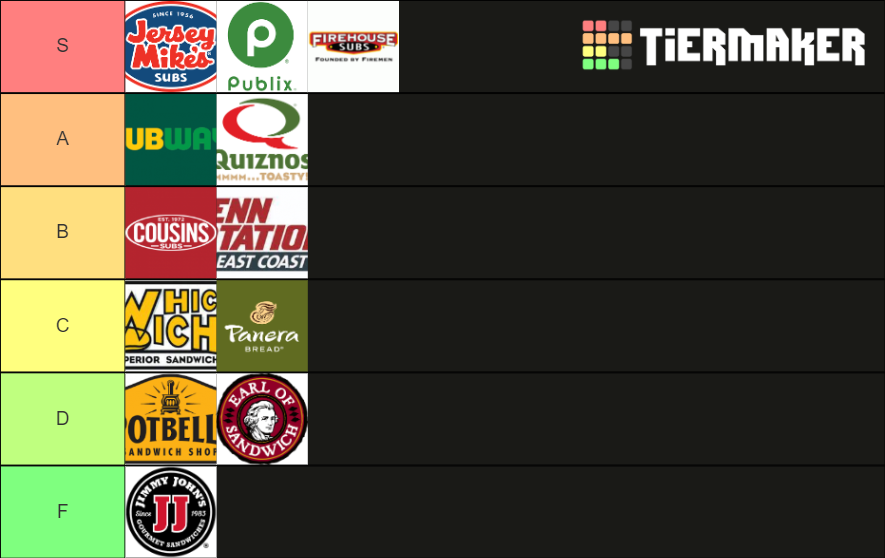 Here’s a link to tiermaker. Make your own tier list and let us know which sandwich shops is your favorite.

Coming in dead last is Jimmy John’s. If I wanted to put together some trash sandwich in 5 minutes, I would have stayed home. Jimmy John’s is the school cafeteria version of a sandwich shop. Scratch that. I’d rather have a school cafeteria’s sandwich than Jimmy John’s. When you have ‘Freaky Fast” in your slogan, that is probably a warning sign to not eat here. Making a sandwich shouldn’t be a race, but it shows in your food. I have eaten at Jimmy John’s a few times in my life, and every single time I’ve had the same thought. “I could have made this, but better back home. Jimmy John’s is on the very bottom of this list, and it isn’t even close. If this place is your favorite, I’m sorry, but do better.

The sandwich shops in D-Tier aren’t horrible, but they’re usually not the first choice. Instead, they’re the places you stop on a road trip because it’s the first thing you see off the highway. Nothing about them stands out, and they kind of feel like the off-brand versions of Quiznos. Pot Belly and Earl of Sandwich leave much to be desired, but they get the job done if you’re in a bind.

C-Tier, like D-Tier, is all about convenience. These shops are where you go because it’s near your office and you forgot your lunch at home that day, and you don’t want to eat a gut-bomb lunch like McDonald’s. The ingredients feel fresher than the places below them on the list, but the price point is why they are in C-Tier. Panera has some decent menu options that let you mix and match for whatever you may be in the mood for, but their food shouldn’t cost as much as it does. It would be kind of like Five-Guys if Five-Guys wasn’t as amazing as it is. While Panera and Which Wich aren’t the worst places, they also aren’t the best hence being placed in C.

B-Tier is where I started having problems ranking these sandwich shops. And I bet this is where some people will begin to think I’m wrong. But it comes down to what you’re looking for in a sandwich shop. Cousins Subs and Penn Station East Coast Subs are in B for me because they lack creativity. They offer some great sandwiches, but they are all pre-built already. As a result, every sandwich feels like the archetype of what it’s called. And while that isn’t a bad thing, it definitely can get a little boring. B-Tier offers the standard sandwich but nothing above that, which is why they get a passing grade. Some people may prefer the pre-built sandwiches, but I like to try weird combinations sometimes.

I can hear you sharpening the pitchforks already. “Subway AND Quiznos in A-Tier? You must be out of your mind.” Like I said before, it all depends on what you are looking for in a sandwich shop. I like that these two places offered so much freedom in their choices. You could order an Italian sandwich and end up with some horror that has BBQ sauce, chipotle mayo, and pepper relish in it. There is freedom and madness in your orders at these two shops, and I love it.

S-Tier shops are the pinnacle of sandwiches. (At least big chain restaurants)

Firehouse Subs is the king of pre-built sandwiches. Everything they offer is amazing, and you’d be crazy to change anything about them when you order. Plus, it feels nice to help the fire department in some way.

Jersey Mikes is a balanced mix of pre-built sandwiches and free-range creativity. You can order a sandwich and have it “Mike’s Way,” or you can dare to imagine the sandwich in whatever way you want. Maybe you want extra grilled onions, but what makes them shine is the deli meat. It might be a gimmick but watching someone slice your deli meat in front of you is somewhat comforting. It’s nice knowing that your deli meat hasn’t been sitting in a tray for 6 hours sweating.

Publix is something that the PNW doesn’t have, but it is the best place to get sandwiches that isn’t a Mom and Pop shop. So if you ever find yourself in the southeast United States, do yourself a favor and stop in the best grocery store ever and order a Chicken Tender Pub-Sub tossed in ranch dressing, grab a lemonade, and have the best lunch of your life. You will thank me later. I love this place so much that anytime family or friends visit me, I make them bring me a sub from Publix. It doesn’t matter that it’s usually cold and soggy by the time it gets to me 10 hours later. It’s still the best thing ever.

Which one’s your favorite

You know that Tik Tok asks you if you had to talk about something for 20 minutes unprepared, what topic could you endlessly talk about? As you can tell, my answer would be sandwiches. I really love sandwiches. It’s the greatest form of food. I didn’t even get into how important structural integrity in sandwiches is. I can even sit there and talk about whether or not tacos, hot dogs, and burgers are all a type of sandwich. And nothing quite beats a homemade sandwich made with your favorite ingredients, but sometimes it’s easier to go out and get a sandwich. So what’s your go-to sandwich shop? Who reigns supreme in your world?

And if you want to read more about my insane obsession with sandwiches, check out  ranking the top fried chicken sandwiches.

Hang Out on Twitch