Movie of the Month: Knives Out 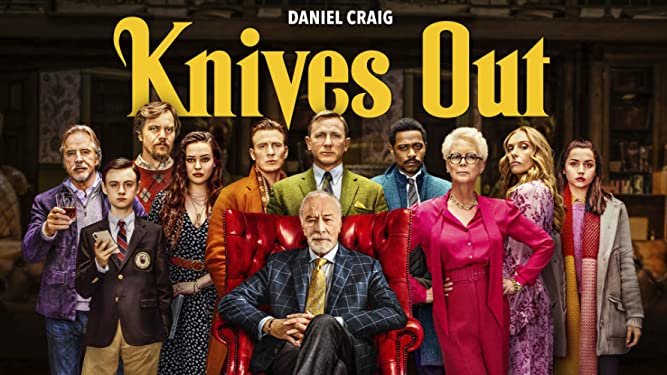 Movie of the Month: Knives Out

“When renowned crime novelist Harlan Thrombey is found dead at his estate, the inquisitive Detective Benoit Blanc is mysteriously enlisted to investigate. From Harlan’s dysfunctional family to his devoted staff, Blanc sifts through a web of red herrings and self-serving lies to uncover the truth behind Harlan’s untimely death.“

I am very much aware that Knives Out was released in November 2019, pre-pandemic. It matters not. Way too many people have not seen this movie and this needs to be set right!

So here I am to give you my opinion (this is the best whodunit movie ever) and talk about the plot without giving away any important details. Let’s begin!

Harlan Thrombey is a bestselling mystery author. The morning following his 85th birthday party, his body is found in his study, throat slit in an apparent suicide. When police officers Det. Lt. Elliot and Trooper Wagner question the family members; they are accompanied by renowned private detective Benoit Blanc (played by none other than Daniel Craig a.k.a. James Bond using a southern accent – wrap your head around that for a second).

Blanc doesn’t believe for one second that Thrombey committed suicide, but instead suspects that he was murdered. He interviews the family members one by one, concluding that they all had their own motives for wanting him dead. He confirms his theory by talking to Marta Cabrera, Thrombey’s nurse. Marta can’t lie…She physically cannot lie.

Shout out to writer/director Rian Johnson for KILLING it. He took the good ol’ murder mystery genre, shook it, flipped it on its head, threw it up against the wall, and the outcome is absolute genius.

I can’t say anything further without spoiling the movie. Know that Knives Out is brilliantly plotted and wittily written. You’ll laugh, and you’ll say OMG more than once. And once you watch it, you’ll watch it again and again. Note: Do watch it a second time. You’ll pick up on cues and clues that you missed the first time, making it even more enjoyable.

If good movies aren’t your thing, and you’d rather watch some terribly bad movies, check out The Most Ridiculous Movies You Can Watch Right Now.